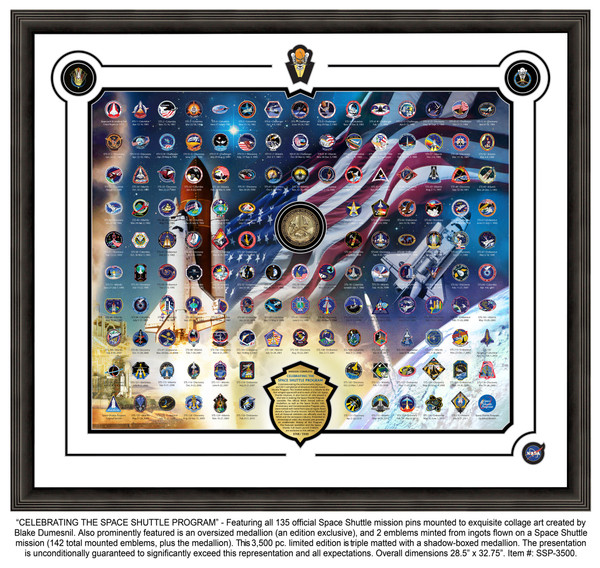 This framed, numbered, collectible set of Space Shuttle Program pins is no longer being manufactured. It is believed that we have the last inventory of this highly sought after item.

A framed limited-edition framed set featuring all 135 official space shuttle mission pins, presented in chronological order. These pins provide an emblematic history of the program and are displayed on an exclusive collage created by artist Blake Dumesnil, who also designed NASA's official shuttle program commemorative emblem. This collection includes each pin's mission number, the name of the orbiter flown, and the launch and landing dates.

An edition-exclusive medallion that was minted with metal ingots which were flown on a shuttle mission (this limited edition is oversized at 2 1/8" and shadow-boxed) is featured as the centerpiece. The ingots were flown specifically to mint official medallions to commemorate the space shuttle program and to honor those who made this program possible.

Two other commemorative emblems minted with metal from the flown ingots are also featured along with an edition-exclusive Space Shuttle Launch emblem (also shadow-boxed), as well as four other program-related emblems. A solid brass story plate is cut in the shape of the program's commemorative insignia and is engraved with the individual edition number of each frame. Included with each framed pinset is a certificate of authenticity that contains a statement from WinCo’s President, Andy Boston, a statement from the artist, and is numbered to match the individual number of the frame itself.

State of the art matte cutting delivers a visually enhanced five-level presentation for the 144 hand-mounted commemorative pins. 28.5" x 32.75". Production was limited to 3,500.